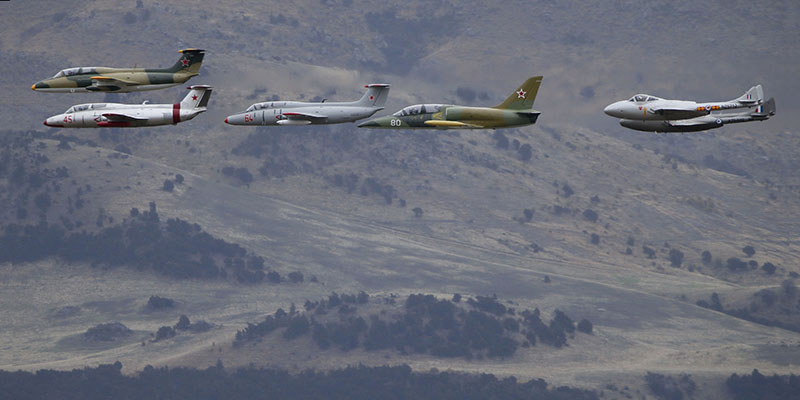 15, 16, 17th April 2022
Three days of high-octane aviation excitement at Warbirds Over Wanaka International Airshow over Easter weekend (15, 16, 17th April) at Wanaka Airport, New Zealand.The scenery this show is set in is spectacular! Renowned for its stunning mountains, lakes and wilderness, this natural amphitheatre provides a stunning backdrop for the Warbirds Over Wanaka Airshow.

After being forced to cancel 2020 Warbirds Over Wanaka, organisers are determined to deliver a stunning airshow at Easter 2022. Organisation is well under way and discussions have already been held with various aircraft owners both in New Zealand and overseas with a view to having them on the flightline at what will be the 17th edition of this world-renowned event. Warbirds Over Wanaka is famous for attracting a wide variety of privately owned Warbird aircraft along with their modern-day counterparts from the likes of the RNZAF, RAAF (F-111’s, F-18’s & Hawks etc), USAF (B-52, F-16’s, C-17 Globemaster) and French Air Force. The Royal New Zealand Air Force has confirmed it will be at Wanaka in force to celebrate its 85th Anniversary. Warbirds Over Wanaka has an enviable record of attracting other air forces such as the RAAF, USAF and French Air Force and they’re expected to be back to help celebrate the RNZAF’s 85th.

Airshow organisers also confirm that a rare German-based Polikarpov 1-16 will be at the Airshow along with the return of Jet Racing which lit up the skies in 2014, with five jets racing metres apart around an aerial racetrack. In total more than 100 aircraft will be on display, from Spitfires and Mustangs, to the polished Harvard and Yak display teams. All the aerial action will be backed up by stunning pyrotechnics, set against a backdrop of the majestic Southern Alps.

While the aircraft are the main focus of their event, there are a lot of other displays on the ground which have made this show so successful over the past 33 years.

The amazing pyrotechnics, the Warhorse re-enactor groups, the aircraft for sale and other exhibitors will all be back to make 2022 a truly unforgettable experience for everyone. Tickets for the 2022 Airshow will go on sale in March 2021 when we will also be able to announce our first confirmed acts.

In 1988, aviation entrepreneur and pioneer Tim (now Sir Tim) Wallis presented an airshow and country fair that attracted 14,000 visitors to Wanaka airport. With its overwhelming success and growth over the years, the show is now a biennial event over the long Easter weekend.

As the show grew, so did its support and aircraft attendance (national and international). The show now boasts around 50,000 spectators and is claimed to be the largest warbird airshow in the Southern Hemisphere. This is one event not to be missed!

Over the years they’ve had the local and national warbirds favourites: a Hawker Hurricane, P-51 Mustangs, Spitfires, a Japanese Zero, one of the original Messerschmitt 109s from the “Battle of Britain” film, Russian Polikarpovs, Yak-3s, a Catalina, Corsair, Kittyhawks and more! Accompanying them were a range of WWI aircraft from Sopwith Camels and Pups, Bristols to Fokkers.

Along with the aircraft, organisers are also reviewing all the ground displays to ensure that 2022 presents an absolute must for everyone.

Sport aircraft, including gyrocopters, RANS, Piper Cubs, Hornets, replicas and percentage scale aircraft will be displayed on the ground along with a various range of other aircraft from all eras.

Scrumptious food and beverages are available with Central Otago delicacies and the Region’s Wine and Beer. Over 40 food stalls with a huge variety of offerings and of course the real coffees.

Hospitality tents and stalls will also be back offering a great selection of food and drinks alongside Aviation trade stands – offering everything from headsets and avionics to aviation software, Boeing navigation solutions, aviation tours and aviation safety. If you’re in aviation come and find out what’s new, where you could be adding value to your aircraft.

Since the first Warbirds Over Wanaka Airshow in 1988, military vehicles have been an integral part of the airshow, forming an interactive display with the aircraft stars. In 1996 the “Warhorses at Wanaka” group was formed, covering all interests in the field of military vehicles. Now the group also involves historical re-enactments giving the military vehicles the image of the time in history to which they belonged. Re-enactment enthusiasts come from all over New Zealand with authentic uniforms and weapons to give the restored vehicles a touch of realism. Watch their mighty 25-pounder guns when they display at lunchtime on the runway. It is hoped the Warhorse display will bring back memories of the past and be a learning experience to the young generations, lucky enough to not have had the experience of war.

Our favourite re-enactors are once again displaying vehicles, armaments, uniforms, tanks, jeeps, trucks and guns from WWI and WWII. See them near the main airport gate and on the runway at lunchtime.

Ever wanted to experience and feel what its like to be in one of these aircraft? Aircraft available for rides will once again be posted here nearer the 2022 Airshow.

We have access to dozens of motels and resorts in the Wanaka and Queenstown area according to budget. We can also easily add on domestic and international flights from your home city as well.

A few options are highlighted below, but please contact us for a quote – we can tailor a part or full package to your needs.

Upgrade to a Lake View with balcony studio room for an extra $55 per person!

Have a group or family?

Package includes: Queenstown airport pick up/drop off and 5-day car rental, 4 nights accommodation in Wanaka and a 3-day GOLD pass to the Warbirds Over Wanaka Airshow.

(above is a guide only, based on twin share, King bed)

A range of ticket options are available from the general Admission tickets to the incredible Gold Pass experience (well worth it!).

The three-day Gold Pass gives you the best seats at the Airshow in a grandstand situated directly in front of the runway. Souvenir programme, gold cap, badge, priority parking and food is available with wine, spirits and beer, to be purchased from a cash bar.

Complimentary tea, coffee and water are available and breakfast may be purchased from 7.30am. This area has its own facilities with closed circuit television to watch the airshow. Also a voucher for free entry to the Warbirds and Wheels visitor attraction (vintage cars, warbirds, art and our Founder, Sir Tim Wallis’ story). Mingle with some pilots, get autographs and walk the flightline once on the Saturday or Sunday.