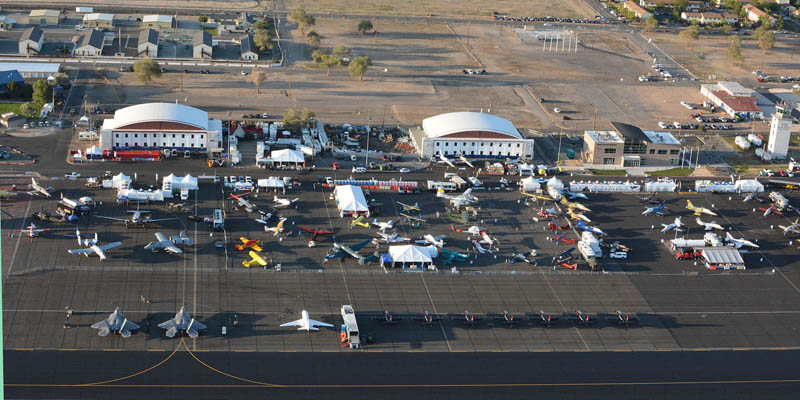 Details to be confirmed. The information below is from last year’s show.

The Reno Air Races, officially known as the National Championship Air Races, is a multi-day event tailored to the aviation community that takes place each September at the Reno Stead Airport a few miles north of Reno, Nevada. Air racing is billed as “the world’s fastest motor sport” and Reno is one of the few remaining venues. The event includes demonstrations by stunt pilots.

4, the Reno Air Races feature multi-lap, multi-aircraft races among extremely high performance aircraft on closed ovoid courses which range between about 3 miles (4.8 km) (Biplanes and Formula One) and about 8 miles (13 km) (Jet, Unlimited) in length per lap. The chief organizer is the Reno Air Racing Association (RARA).

The first Reno air races, in 1964 and 1965, were organized by World War II veteran Bill Stead. They took place at Sky Ranch airfield, a dirt strip barely 2,000 feet (610m) long, which was located in present-day Spanish Springs. After Stead Air Force Base (20 miles to the west, and named in honour of Bill’s brother, Croston Stead) was closed in 1966, that field was turned over for public use, and the races have been held there since then.

Aircraft in the Unlimited class, which consists almost entirely of both modified and stock World War II fighters, routinely reach speeds in excess of 400 miles per hour. In 2003, Skip Holm piloted Terry Bland’s modified P-51D Mustang, Dago Red, and reached an all-time Unlimited class speed record of 507.105 mph in a six-lap race around the eight-and-a-half mile course. The recently added Sport Class racers, mostly homebuilt aircraft, are reaching speeds in excess of 400 mph. In 2009, Curt Brown set a record of 543.568 mph in his jet-engine L-29 Viper.

The Reno Air Races include two and one half days of qualifying, followed by four and a half days of multi-aircraft heat racing, culminating in the Unlimited Class Gold Race on Sunday afternoon. The event also features civil airshow acts and military flight demonstrations between races, plus vendor areas and a large civil and military static aircraft display.

In addition to the racing they have a range of flights and displays including the “Patriots Jet team”, The Heritage flight program and the Air Combat Viper Team.

The Heritage Flight Program, of which the F-35 is a part, teams up current Air Force fighters with planes from the World War II, Korean and Vietnam eras in a dynamic display of our nation’s airpower history.

The F-35 is the U.S. Air Force’s latest fifth-generation fighter. It will replace the F-16 Fighting Falcons and A-10 Thunderbolt II’s, which have been the primary fighter aircraft for more than 20 years, and bring with it an enhanced capability to survive in the advanced threat environment in which it was designed to operate. With its aerodynamic performance and advanced integrated avionics, the F-35 will provide next-generation stealth, enhanced situational awareness and reduced vulnerability for the United States and allied nations.

The F-16 Fighting Falcon is a single-seat, multi-mission fighter with the ability to switch from an air-to-ground to an air-to-air role at the touch of a button. With its lightweight airframe and powerful General Electric engine generating 31,000 pounds of thrust, the F-16 can fly at speeds in excess of Mach 2.